Last summer I was looking for a thing to wear on my head to go with my brand new Viking. I googled Norse and Caps, and I kept running into the Birgitta Cap. I fell in love, but then it turned out that the silly thing was not Viking era at all, but 14th century.
Well...I kinda do the 14th century thing a lot, so it was the perfect excuse. I did make a nice Viking cap, too, which is nice, but not terribly exciting.
I started the Birgitta Cap (which, for those of you who haven't run into it yet, (and I'm surprised you managed to avoid it so far) is the cap of Saint Birgitta, a 14th century Swedish saint) last summer, and planned to work on it during Pennsic. I'd gotten the pieces cut and hemmed and the herringbone stitch done, and started on the embroidered front piece, and then I left it in my embroidery basket with a whole lot of embroidery floss during a rainstorm.
The front piece was permanently stained rusty-red, so I had to start that bit over. I was demoralized, and so it took me until this June to make any more progress on it.
Then, I signed up to teach Butter 101 at our local large summer event, Pax Interruptus, and was thinking about what to wear, and then I thought: the cap! I should finish the cap!
Of course, this left me about two weeks in which to do this, with the large part of the embroidered center, the entire embroidered front, and then the assembly left to go.
Somehow (with much obsession) I managed, and so, here it is.

Here are some lovely sites which give you basically enough information to make it yourself:
http://m-silkwork.blogspot.com/2008/11/womens-caps.html
http://windwraith.blogspot.com/2008/08/cap-of-st-birgitta.html

I used lightweight white linen (the same weight I use for medieval undies, ILO20 at
www.fabrics-store.com), and I got my 100/3 Londonderry white linen thread at www.hedgehoghandworks.com.

I started by measuring my head and cutting out two quarter-circles for the body of the cap. I used the selvedge for one side and hemmed the other (in retrospect, don't bother, the raw edge will be covered on both sides). I also hemmed the curves (this IS necessary). Then I cut a 3" wide piece long enough to go all the way around my head with a little to spare, and another 1" wide piece for the band.

The original Birgitta cap's front is embroidered with a honeycomb stitch, and everyone who has made a replica has done it exactly the same way. That's lovely, if you want an exact replica, or if you're doing it to see if you can make a copy, but it's highly unlikely to me that every woman who had a similar cap would have had the same embroidery (some probably had none at all). I decided to go with a different motif. At first, I came up with a feathered chain stitch which looks like leaves, but that one got ruined, and when I went back to do it again, I thought, what if someone sees this and thinks it's a Laurel cap? I don't want to be mistaken for a Laurel when I'm not one. 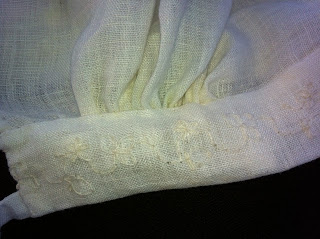 Eventually I decided on a motif of strawberry vines with leaves and strawberries and flowers (because I have the right to wear such things, so why not use it?).
I did a little research on medieval embroidery, but I didn't want to do anything filled or couched, and it appears (I say tentatively) that with some minor exceptions, modern embroidery stitches were used in period. I ended up using back stitch and variations on lazy daisy.
I used a running stitch through the middle as a guideline, because with white fabric I didn't want to write on it.

The two halves of the Birgitta cap are not sewn together in the middle like an arming cap would be, but are held together by a 1/4-1/2" embroidered latticework.

Once the herringbone was done, I could take it off the pillow and do the interlacing part without as much tension. I left it basted to the linen until all of the embroidery was done. I kept reading conflicting ideas about whether there needed to be a gap at the bottom center or not, so I ended up doing the embroidery right down to the end, and then undoing about 1 1/2" at the bottom.

The nice thing was that the embroidery was a little raggedy at the ends, and undoing it and binding it off made it look much nicer. I hid the ends in the hem.

The band is about 1/4" wide, and I made it by folding the sides in, and then folding it in half and using overcast stitch to seal the edges inside.

Finally, I ironed everything and started to assemble it. I ran two lines of basting at the bottom edges, and pulled to make pleats. Then the front embroidered piece was pinned starting at the center front (because of the interlacing stitch), and then all the way around until it reached the gap in the back. Then I folded the edges in and sewed it all up. The band is attached to both sides at the bottom corners of the embroidered piece, and when you wear it this criss-crosses over your head once in back, once in front at the top, and then it should fit snuggly around the top back of your head to create the pear shape of the cap. Mine was too short to do this, so I ended up having to make a second one.

I measured my head, then cut and sewed the new band, and then pinned the ends in place on the hat, and tried it on. I ended up having to cut another 3" off the band before attaching it permanently. 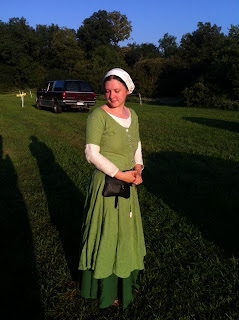 I finished it the night before Pax, but I wore it all day Saturday, and it was comfortable, kept my hair out of the way, and worked as a nice bit of padding for my coronet at court. I'm very happy with it!