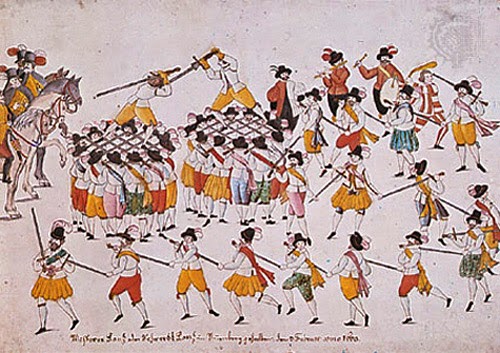 Longsword dancing is a type of dancing found all over Western and Central Europe and Britain, consisting of a group of people in a ring, linked by some form of rigid metal or wooden swords. It is often called hilt-and-point sword dancing.

It originates as early as the 13th century, but was recorded most often starting in the 14th and 15th centuries in Western Europe, primarily in The Low Countries, Spain, and Germany.

It seems likely that this style of dancing was for city festival entertainment. Sword dancing seems to have originally been associated with late winter festivals, such as Shrovetide, but is now associated with any and all festivals.

Based on the evidence from the 15th and 16th centuries, it appears likely to me that it was associated with sword-makers: first with blacksmiths, then with “cutlers”, people who specialized in sword-making.

The oldest continuous sword team is the Überlinger Schwerttanzkompanie in Germany. While their costume is currently based on 18th century clothing, and they follow their sword dance with a 19th century-style couples-dance, the first recorded mention of it is in 1646, and the guild which founded the team was first mentioned in 1538.

Several other, potentially older, dance groups have been revived and are currently performing in other parts of Europe:


Traunstein, Germany, in Bavaria, has a sword dance first recorded in 1530, which was revived in 1926. They dance in Landsknecht garb. 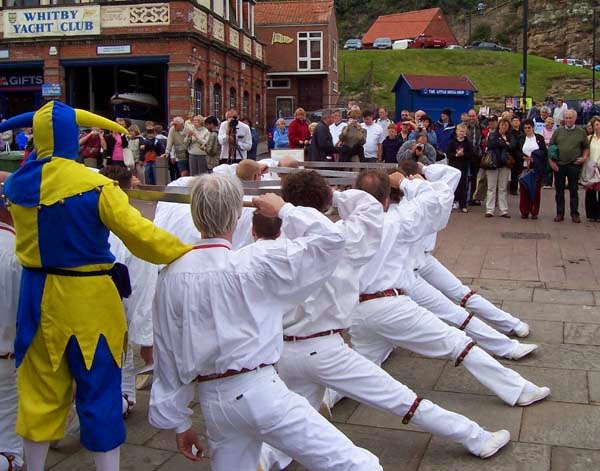 Lange Wapper dance, based in Antwerp, was revived by Renaat van Craenenbroeck in 1970, who also helped revive several other Belgian and Flemish groups. Flemish sword dancing was most popular between 1515 and 1565, before the wars with Spain.


Basque sword dancers wear Basque costume and have a very large number of dancers at one time. There is also a revived version of a many-dancer sword dance in the Piedmonte region of Italy.


There are sword dances in Central Europe, mainly in formerly German-speaking areas. Similarly to the Überlingen dance, they often follow a sword dance with couples dances. 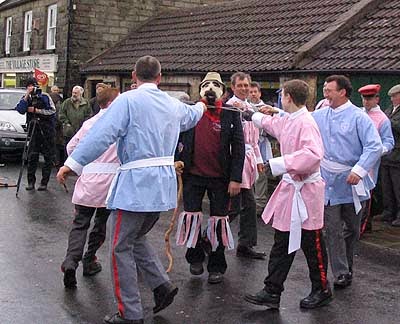 In the Shetlands, on the island of Papa Stour, there is a very unique sword dance which uses long, slightly flexible swords. Though no one lives on Papa Stour anymore, people come back there sometimes just to perform the dance.

There are two kinds of sword dance in Northern England, one which is only loosely connected to the hilt-and-point traditions, called Rapper, and the other is Longsword. 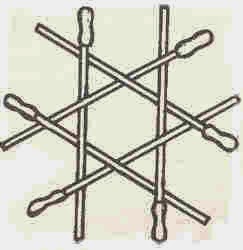 The main similarity between all hilt-and-point linked sword dances is just that. They are danced by a group of people, linked by the hilts and points of “swords”. The swords are not actual swords which could cut you, because otherwise holding onto the point would not be fun.

There are dances done with sticks, with flat wooden slats, with wooden swords similar to wasters, and with blunt metal swords with wooden handles. The dances all feature weaving figures where all of the dancers go over or under one of the swords without losing hold of the others. Some are more complicated than others, and some involve specific stepping, while others just march.

Many sword dances involve a lock, or a star, in which the swords are woven together at the end of the dance. In Northern Europe, this often culminates in a dancer being raised on a platform made of locked swords, and either waving a flag, or sword-fighting with another dancer raised on a second platform.

In English sword dancing, the lock is usually used to display as a star (English longsword dances involve 6 people, where the European ones often involve a dozen or more, and historical European ones involved up to 28 people in a lock, and over 100 in the dance itself), and/or to “kill” a fool figure by beheading. The beheading also features in several of the European dances. In the European version, the “dead” fool is carried off, but in the English version, they are often revived with a maiden’s kiss, allowing for audience participation.


The fool features in almost all of the dances, Longsword, Rapper, and even the related Morris Dancing done in England. Sometimes it is a Molly, a man dressed as a woman for comedic effect, sometimes it is a Medieval-style jester, or a character, such as Saint George. The fool is also sometimes accompanied by a hobby-animal (a person dressed as an animal, or a person dressed to look as if they are riding an animal).

There are a few overall rules: Don’t drop your swords. Don’t bend your head/back unless you’re bending down to put your sword on the ground. If you have to duck, use your knees. Don’t stab anyone! Always move forward, never backward.

All dancers hold their sword, point up, on their right shoulder, with their right hand on the handle, and their elbows down near their waists. Start on the right foot, on the beat. Follow the leader.

The leader will lead the line into a circle, going clockwise. When the leader puts the point of their sword into the center, every other beat, the next person in line does the same, until there is a pyramid-shape in the middle. All dancers twist their swords to the beat 4 times.

Take your sword and place it over your left shoulder, right hand still on the handle, pointing the tip backwards so that the person behind you can reach it. Take tip of the sword in front of you with your left hand. Continue walking in a circle during all of this.

On the leader’s command, lift both swords over your head and drop your arms to your sides, to form an open ring with the other dancers.

The leader and the person to their right (Number 2) raise their sword between them and stop walking forwards. Continue stepping in place.

Number 6 leads the line under the raised sword, raising their sword (the one in their right hand) up over Number 2’s head. Both 1 and 2 hold the two swords together. If you are not 1 or 2, keep moving forward, staying behind the person in front of you. Once everyone is through, both 1 and 2 rotate and drop their swords down to form the circle again.

Ideally, this should take 8 beats. On beat 1 of the next measure, Numbers 2 and 3 raise their sword, and the circle begins again. This continues until all of the dancers have been the bridge.
Circle up for 8 beats to re-set. 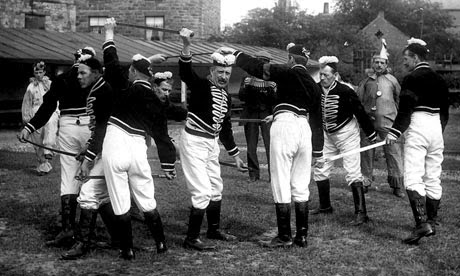 The two dancers directly opposite them (4 and 5) put their mutual sword directly in front of them and walk forward, stepping over the sword together. 3 and 6 follow as a pair. As soon as the sword is crossed, banana-peel, bridging the sword over the other dancers (not hitting them in the head). Number 1 follows their higher sword over the lower sword (spinning over the sword on the ground), and Number 2 stands up after Number 1 is over. Form the circle again.

Again, ideally this is 8 beats, though it’s harder than single under, so it might take longer. On beat 1, Numbers 2 and 3 drop their sword, and the circle begins again.

A nice flourish here is for the pair first over the sword to spin and hit the two swords of the next pair briefly with their sword before going over them. This is only a flourish, though, not necessary, just pretty.

When everyone has put their sword down, the figure is over, circle up for 8 beats to re-set.

All dancers spin over their right shoulder (right shoulder back, staple your right foot to the floor and spin clockwise, whatever makes sense to you) swords over their heads. Don’t grip it too tight, the swords are allowed to move in your hands, just don’t drop them.

Pass your point to the dancer on your right, and take the point of the dancer to your left. Your hands should not be crossed.

All dancers even up the swords so it looks like a 6 pointed star.

On the leader’s command, (“make”) cross them so that the lower sword is on top. If you had a proper handle, you would want the cross to be above the handle. Without one, just make sure they overlap really well.

The other dancers let go, and the leader lifts the swords to show off the star. At this point you can either walk around them, stand in a line with the star in the center (rapper-style), or have a fool come into the center, and lower the sword-star around their throat.

Either way, bring the sword star back down, and everyone takes a handle with their right hand.
On the leader’s command, everyone pulls the handle of the sword in the right hand, so that the star dissolves.

Points on the floor. On the leader’s command, raise your sword tip up and place it on your right shoulder. Follow them out.

If you left a dead fool behind you, at this point, you could either carry them off (usually done before the dancers leave), or find someone in the crowd to revive them with a kiss or a pill or something.

Your dance is done!
Congratulations!

There are many other figures that can be added, such as Double-Under, Single-Over, Over-Your-Own-Sword (hard and requires some athleticism), Triangles, and Weaving.


“Chasing theStar of Swords: Sword Dancing on a Watson Fellowship, A Year of Following Hiltand Point Sword Dancing in Europe”, a blog by Jeremy Carter-Gordon, 2011

A number of articles, mostly based on articles published privately in the 80s by Trevor Stone in the “Rattle Up My Boys” longsword publications. This website is kept by the Newcastle Kingsmen, a rapper team in England.

The dance at the end of this handout is taught and performed by the Pokingbrook Morris Women, Albany, NY, primarily in the winter. It is (somewhat loosely) based on the Kirkby Malzeard Sword Dance.

Posted by DryadArts at 10:59 AM No comments: