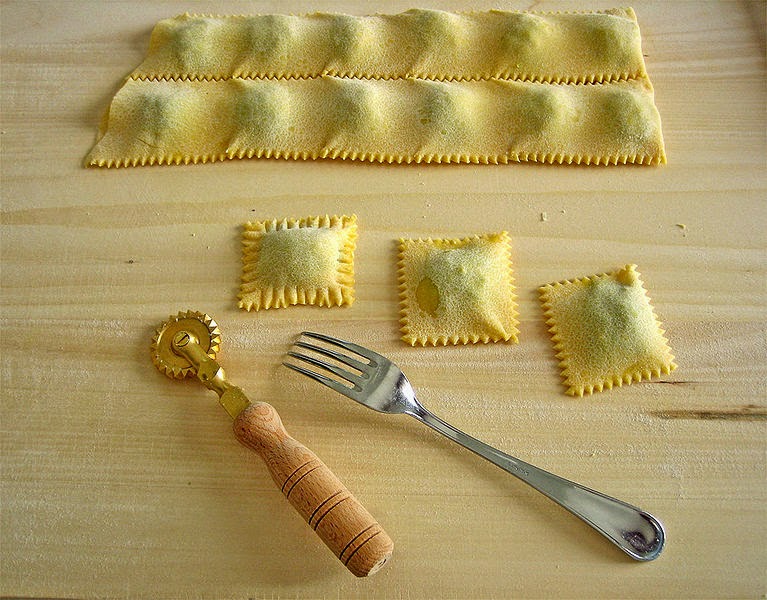 I am not much of a food historian. I enjoy historical food, and I enjoy making food, but for some reason, I just don't do a lot of historical food research (could be my issue with research, actually...).
Luckily, I have many food historians in my life. One is my peer, and another is my stepchild's peer.
Last weekend, we got together to make ravioli.


I forgot to make the soft cheese the night before, and so there I was, morning of the ravioli-making-session, with no cheese. I could've gone to the store, but to me, that would've partially defeated the purpose, so I decided I should give it a shot, anyway. 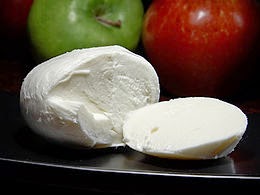 The last time I tried to make mozzarella, I failed miserably. Also the time before that.
For some reason, even with only-normally-pasteurized whole milk, citric acid, and fresh rennet, I couldn't get it past the curd stage. It would look beautiful right up to draining the whey off after cutting the curd, and then I would microwave it and it would go sploosh and melt all together.
My cheese-guru, The Honorable Lady Lidia the Cheesemaker, suggested that the milk was too pasteurized despite not being ultra-pasteurized, and I would probably have better luck with raw milk.

However, it resulted in a soft cheese with a lovely texture. I thought it would be a great filling for ravioli, and it was much quicker than the 12-hour-draining Roman soft cheese recipe I usually use.
So, I went ahead and started to make it. Of course, I couldn't find my 5-Minute-Mozzarella recipe anywhere, so off to the internets I went.
The first recipe that looked good was from The Pioneer Woman's blog.
I fudged it a little, for various reasons.

One thing that was different from what I'd done in the past, was that she added the citric acid to the pan first, before the milk.
1 1/2 teaspoons of citric acid powder dissolved in 1/4 cup of water, and then 1 gallon of milk added on top.
I heated it to 90 degrees F, and then removed it from the heat.
I crushed 1/2 a rennet tablet (this was twice what her recipe said) in 1 cup of water, and then added it to the milk mixture, and stirred in a circular motion up and down. 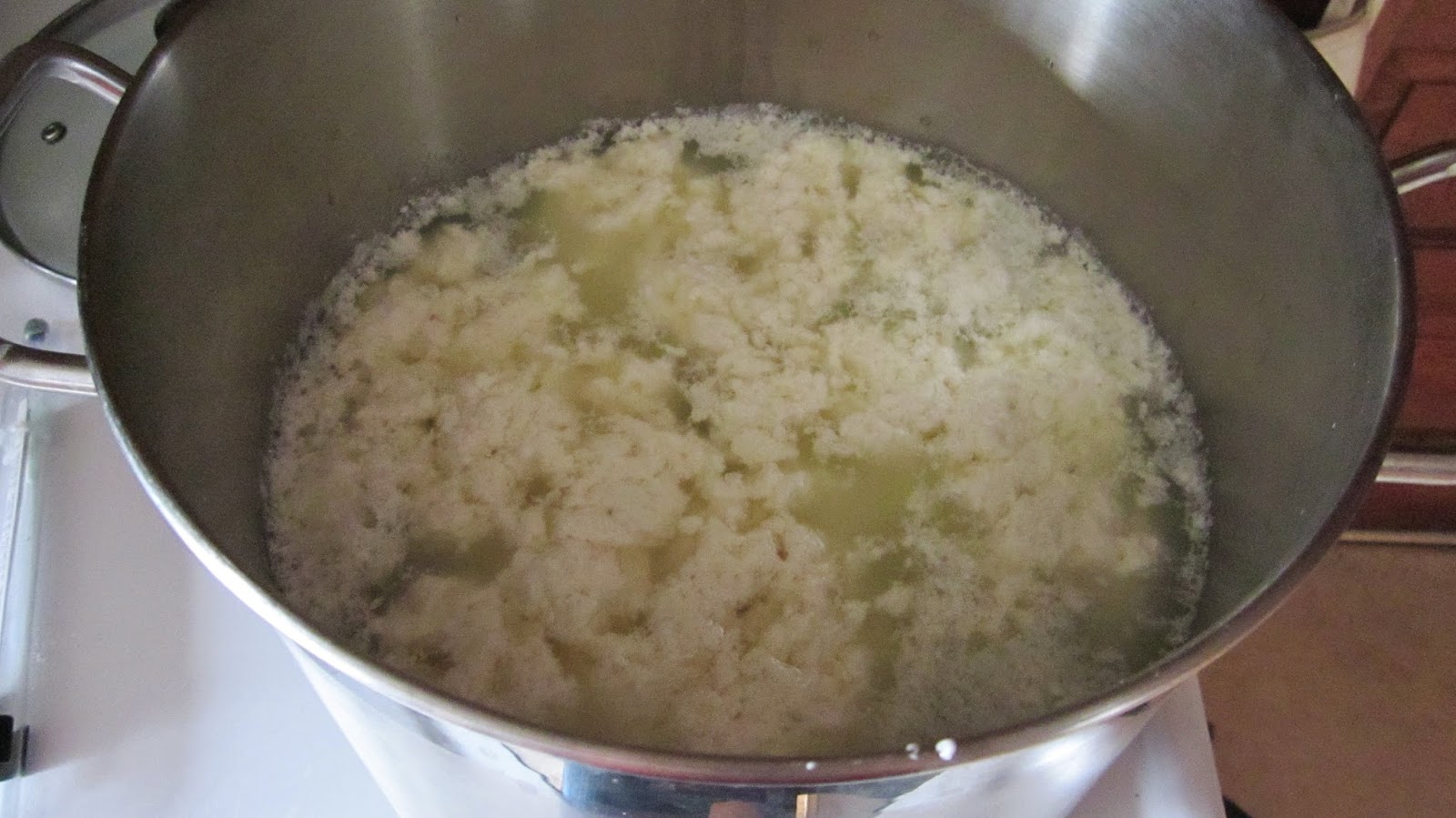 I noticed a difference right away. In fact, by the time I'd finished stirring, there were great clumps of curds hanging out in the whey. Nothing like the first two times I'd tried it, when it was obviously thicker, but not clumpy at all.
I let it sit for 10 or 15 minutes (the first time I'd tried to make mozzarella, I cut the curds way too soon).
Then I came back and tried to cut the curds. It was still pretty clumpy and they didn't cut into nice squares the way they'd done in the past, but I cut them anyway.
The next thing that I believe was different was that, rather than pouring off the whey right then, she said to heat it up again. I heated it to 105 degrees F, then removed it from the heat again, and poured it into a colander. I saved the whey in a bowl.

After this step, the microwaving began.
First 1 minute. After I pulled it out the microwave, thoroughly expecting to have gushy soft cheese in the bowl, I was shocked to find stretchy cheese with some liquid in the bottom. It was melty cheese, sure, but not gushy soft cheese. It was clearly mozzarella! 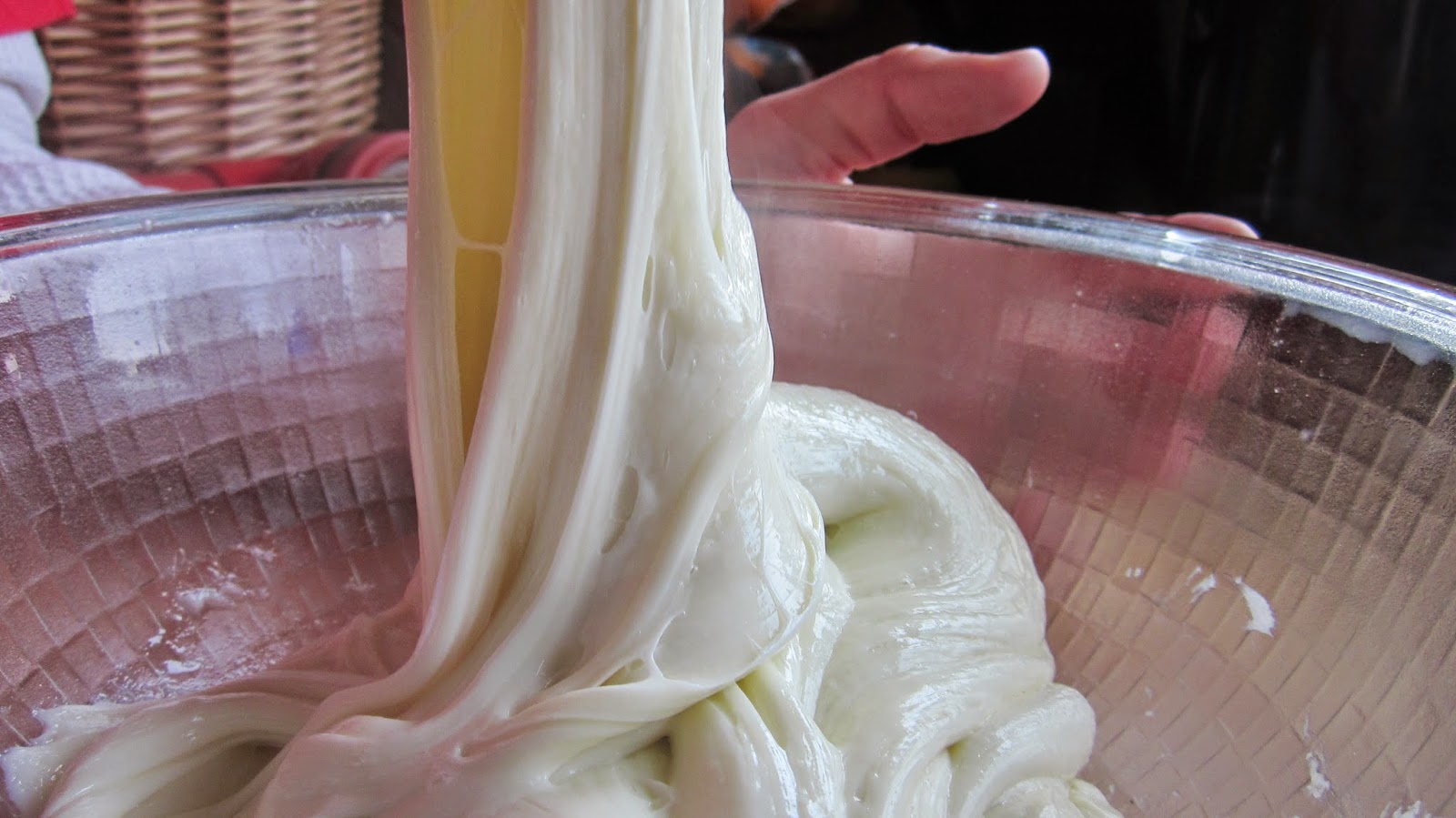 At this point, having kneaded it once more (this was very HOT cheese, and I had no gloves, so I mostly used a spoon) and added salt, I dumped the cheese into a bowl of ice water and took a deep breath.

I blame it on the ravioli. The Powers That Be clearly knew I was planning to end up with a lovely soft ravioli filling, and so blessed my milk so that I would be stymied, and gain real mozzarella for the first time ever!

Of course, as thrilled as I was to have mozzarella at last, it wasn't going to work for ravioli.
I made a half-hearted attempt to make ricotta with the whey, but it was truly unsuccessful, so off I went to the store with 2 hours to go.

With a new gallon of milk, I decided to go with Katja's tried and true Roman soft cheese recipe (to be found about halfway down, "Melca").
I poured a quart of milk into the pan, added around a cup and a half of cream, and a half teaspoon of citric acid in hopes of making up the difference, and heated it up. I ended up adding 2 T of cider vinegar instead of one, and then stirred it like the mozzarella, and let it sit for about 15 minutes. 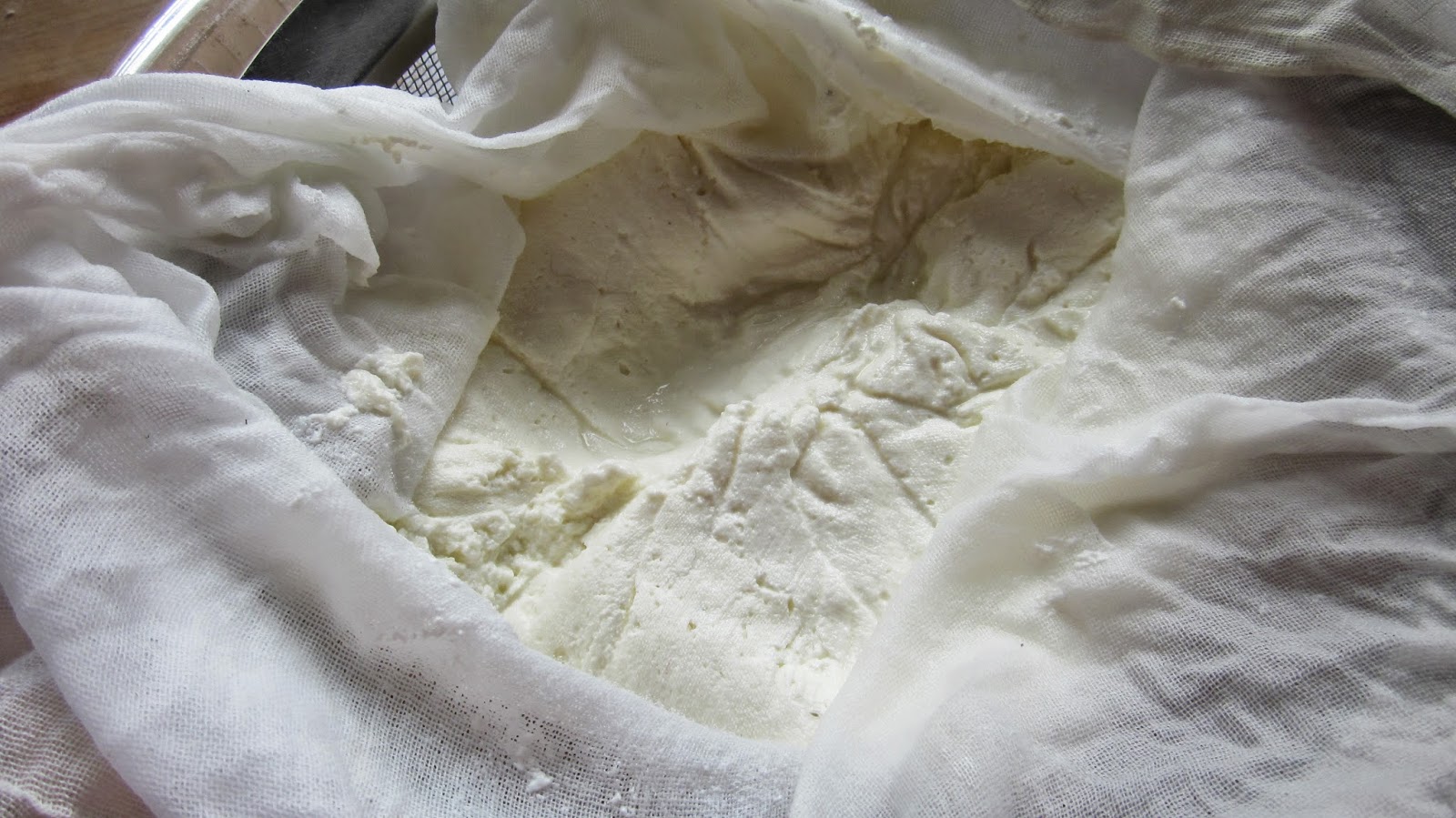 Then I put a large piece of butter-cheesecloth (thanks to Lidia) into a colander over a bowl, and let it drain for an hour and a half.

At the end of this it was pretty well drained (though it certainly could've gone longer), and remembering that Sadira cooks with whey, I packed that up in a tupperware and got ready to go.

I brought 3 1/2 dozen farm-fresh eggs with me to Sadira's. 2 for the other cooks, and 1 1/2 dozen that we keep for ourselves at all times, to use in the ravioli. I also brought a bag of semolina, both cheeses, and the kids.

We forgot the historical cookbooks, but luckily Sadira has plenty of them, one of which was The Medieval Kitchen, by Odile Redon, Françoise Sabban, and Silvano Serventi.
We decided to go with recipe No.8, "White Ravioli, or Dumplings with Sugar" for the filling, though the recipe is for a pasta-free dumpling, rather than ravioli. We used No. 7, "Meat Ravioli in Broth" for the pasta recipe.

Katja was not there yet, so while we waited, Sadira made the whey into some lovely bread dough.
After a bit, we decided to get started.
The pasta recipe was very basic, just flour and eggs. Sadira had some semolina as well, and hers was open, so we went with that. The recipe called for 1 1/2 cups of flour and 2 eggs.
We put in 2 cups of semolina and 1 of all purpose flour, and then added 4 eggs. The Young Person in the room mixed it all together and kneaded it, but it was very stiff, so we added one more egg, and then a bit more all-purpose flour to balance it out.
When it was a nicely textured dough, we got out the many pasta-rollers.

Sadira has a Kitchen Aid with a pasta roller attachment, so we started with that. It went on okay, but when we started to run the dough through it, it began to rotate. None of us had ever used it before, so we weren't quite sure what was going wrong. We started to pull out my hand-roller, but then we discovered it just wasn't on firmly enough. After that, it worked like a dream.
We rolled it down to the #5 setting, and set it out on the counter.
Meanwhile, I took the soft cheese, added some sugar, cinnamon, and ginger, and mixed it together. It was still fairly wet, so I ended up adding some flour for body.

The second quarter of the dough was rolled by now, and Katja arrived just in time to supervise the assembly.

She had brought a ravioli-maker, but unfortunately it turned out that it went to the wrong pasta-roller, so we decided to go old-fashioned and do it by hand.

The Young Person in the room brushed egg white and water in stripes down the dough, and we made two rows of ravioli filling. Then we re-brushed the egg-white mixture, and pressed the top layer down over the filling. Katja and the Young Person spent a while making sure the edges were all sealed down, and then cut the raviolis apart.
We boiled them briefly in salt-water, and set them on a plate.

The bread dough was ready to go at this point, so Sadira rolled it out into rounds and fried it.
While we worked on the second batch of ravioli, the Smallest Person in the room taste-tested the ravioli, both boiled and fried, and pronounced them yummy.

Sadira suggested making Roman Pizza with the fry-bread, by spreading it with honey, dotting it with my mozzarella and sesame seeds, and then toasting it.
It was amazing!

Finally, all the ravioli was done, and some of it was fried, and we were ready to clean up.
There was still some cheese-filling left over, and Sadira decided to turn it into bread as well. She mixed in some flour, and fried it up, and it was also delicious! It was sweet and a little spicy, and with a lovely texture.

We brought a little of everything home for my husband. It was a wonderful day.


Posted by DryadArts at 1:09 PM No comments: