A long break, but success!

For the last two weeks, I've been at Pennsic, a weird and wonderful place.
This year was much less hectic and stressful than last year, which is good, but I had a three year old, which (as much as I adore the child) was difficult.
I had a few goals for myself this year, some of which focused on crossing items off my A&S50 list.
On the list, I was going for teaching a class, making glass beads, and bookbinding.
I only managed one out of three, but I achieved a goal I hadn't been going for, so I'm happy with that.

The class I taught was Butter 101 (of previous posting).
Knowing Pennsic, and specifically the popularity of food classes at Pennsic, I limited the handouts to 30 per class and the materials to 24 per class. Luckily, I guessed pretty close to right on that. I think if I were to do it again, I would maybe raise the limit on both by around 5. 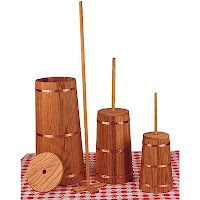 First, though, the saga of the butter churn.
I have been wanting a butter churn for a long time, since I first saw them advertised in Lehmans.
Back then, they sold some lined with wax, for home use.
When they discontinued the wax-lined version, I just assumed that the non-lined ones were normal butter churns that might benefit from some wax lining, or just regular use, and that Lehmans was saying "not intended for regular use" as a CYA in case the churns weren't cleaned well and made someone sick. I was wrong.
I bought the largest model (5-8 quart) right before Pax, intending to use it in my class.

I should've known when I unpacked it that it was not going to work properly, because the rings were riveted to the wood, and therefore would not move. I haven't experimented with removing the rivets to see if it would work properly at that point, because I doubt it (and it works okay now that it's been modified).

We filled it with water to soak it, and within an hour, it was empty.
Needless to say, I did not use it at Pax except as a visual aid.
Aside from the staves being decorative, the other problem was that the barrel wasn't made well enough to be water-tight (and also is not round, but octagonal), and most of the leaks were around the base. 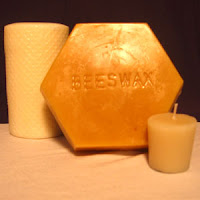 I had originally decided not to wax-line it, because that was a modern way of avoiding biological contaminants because of the wood absorbing the milk and potentially breeding bacteria. I thought if I just bleached it or scrubbed it really well, it'd be okay (for my use, not for the students to eat the butter or anything).
I decided to backtrack and wax-line it, in hopes that it would be water-tight enough to use in class, anyway.

So we hauled the thing to Pennsic, and I melted the beeswax and painted it on the entire inside and around the outside base. After that, it held water nicely.

Next is the saga of the cream. 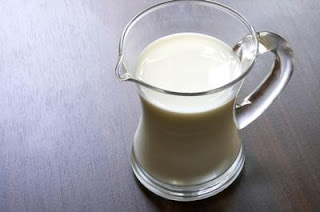 I had been told that ultra-pasteurized cream wouldn't make butter (I knew it wouldn't make cheese, even some plain pasteurized cream has given me difficulties with that), so I was looking for plain pasteurized. I tried the grocery stores first, but apparently Giant Eagle (or at least the ones where we were) doesn't carry regular cream, only ultra-pasteurized, and no quarts at all. Furthermore, the price was ridiculous for the pints, even compared to the price back home, which I already thought was a bit much. Because of the giant churn, I had to get a lot. I was figuring on 6-8 quarts.
Next I tried the camp store, which carries local dairy products. No cream at all. I even asked them specifically whether the dairy they buy from could maybe do a special order. No go. She did say that maybe next year they could request it, but not this year.
Next I did an internet search for local dairies. I thought maybe buying direct would work. Pennsylvania has a lot of dairies, so it shouldn't have been a problem. I found a few, but they specialized in cheese. One of them I drove all the way into town (which probably should've been a clue), half an hour away, to find that the address given was a tiny concrete block building with faded lettering, right next to an industrial plant, with no one home anyway.
Desperate, I finally tried Walmart. I don't like Walmart. I don't like supporting it. However, they did in fact have quarts of cream, for less than half the price of the Giant Eagle's pints, and they had eight of them. I bought six. They were ultra-pasteurized, though (again, the only thing available). Turns out, it works fine for making butter.

When at Pennsic, we live a pretty long distance from anywhere, including the A&S tents where the classes are held. We have a nice Radio Flyer cart donated by my grandmother, so I loaded that up with the churn, the handouts, 6 quarts of cream, butter-hands, a leaf-shaped wooden platter, a roll of paper towels, the plastic lidded cups and toothpicks for student use, and my toddler and toddler-gear.
Squeezing the toddler in between the churn and the cream with some books to keep busy, I started down the hill 15 minutes early.

25 minutes later..
Luckily someone in the class knew where I lived and kept reassuring the students that I was coming from way over there and it might take awhile.
There were a few friends in the first class, and that was very nice, especially since the toddler went right over to them and stayed calm and relatively quiet the whole time.
I was terribly nervous and rushed through my spiel, but everyone seemed to have a good time, and we only went through three quarts filling up the containers for the class to use, so I put the other three in the churn.
I was told I ought to add my contact information to the handout next time, and I shall.
Other than that, the only comments I got were good ones.
I did feel awkward enough that I didn't ask anyone to churn with the big churn. By the end of class, the big churn was only maybe 1/3 of the way done, so I put it back in the cart and rolled it over to the Artisan's Row, which, luckily, was doing a day of Dairy, with my friend Lidia the Cheesemaker!

I spent the next hour or so hanging out in the Artisan's Row tent with her, discussing cheese and butter and relative temperatures, and learning how the churn worked (it's not complicated, but it does take a fairly large amount of arm strength near the end). Lidia kindly lent me a bowl for kneading because the leaf-shaped platter was not big enough for the amount of butter I got out of the churn. I gave her some of my buttermilk for demonstration, and carted the child and the churn, the butter and the buttermilk, back to the fighting field. People there helped me cart it back to camp.

Then people in camp teased me about butter for the rest of the week and a half. 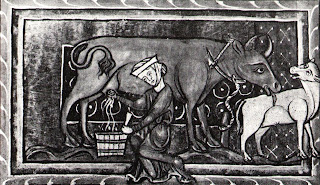 Things I learned during my first class:
The second class was a little more professional. Kingdom Court was right after my class, so I was driven down to class with the cart in the back of the truck, so I could get back.
My plan was to cart it all back, change, and run back down to attend court. That was a silly idea.

The class was a little more full this time, although we only just went over the limit in attendance. I gave away my copy of the handout, but we only got maybe two more people after that.
It was a lot louder the second time, so I had a much harder time making myself heard.
There were no hecklers (yay!), and again, everyone seemed to have a good time. I gave people the opportunity to try out the big churn if they weren't able to get a kit, and as a result, I got the butter done much faster than the first time (in terms of actual churning time...it probably really took me longer because I had to cart it around in between). 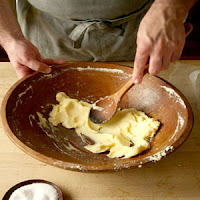 After the class ended, I carted the butter back to the Royal Camp, because I noticed they were already about five minutes from processing. I toyed with the idea of leaving the butter cart there, and running back to get my hat, but I didn't want to leave the butter half done for hours.
In the end, a friend of mine and I walked to court behind the procession, she carrying my buttermilk pitcher, and I carrying the cart, and I finished churning in the very back. I had a horrible fear that I would get called into court, hatless, in a mildly dirty and cream-stained dress with butter on my hands, but luckily that didn't happen.
I did get a laurel (for those non-SCA peoples, a highly respected artisan) asking me questions about the butter-making process, which was novel.
Apparently I also spawned a bunch of dairy-themed jokes in that quadrant of the hall.

All in all, it was a success, and we have quite a lot of butter, some of which I managed to pawn off on people, and I know how the churn works, which makes me happy.


Posted by DryadArts at 1:48 PM No comments: